Baby Shower of Mine

Ok, don't laugh... but I made my own baby shower invites. Well, alright, let's say that I designed them and used husband- & friend-labor to assemble them. But that happens when you're the go-to-gal for pretty cards among your friends. :) And you know I loved every minute of it! 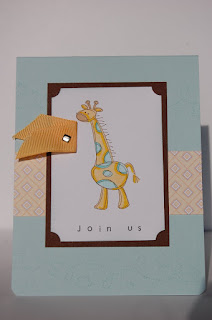 Here's the front.
The color scheme incorporated Soft Sky (SU!) & Summer Sunrise (PTI)- not too different from the color theme for this party, but I already had a lot of the paper & supplies. I was on a "gotta save" kick, especially with buying all sorts of baby stuff. The bedding that I had gotten for the baby's room was sort of a jungle animals theme so that's what we went with for the shower theme as well. Don't worry, after the invites, I stepped back from any sort of planning :).
For the main image I stamped the giraffe image onto white cardstock and colored it in with Copics. I went on a hunt for the PERFECT match to the blue & yellow at my local Dick Blick's and I totally scored. Then not too long after, Nichole & Debbie from PTI came up with a color chart! Talk about bad timing or... great minds think alike(?). Anyways, the "Join Us" was stamped at the bottom with Simple Alphabet in black. I used a ticket corner punch then matted the giraffe onto Dark Chocolate CS. It's hard to see but on the card base I stamped a border image at the top and bottom using Soft Sky ink. You can click on the image for a larger picture. Before adhering the image, I added a strip of patterned paper. 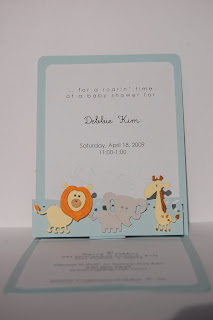 The wording, for mass production sake, was printed from my laser printer onto a textured linen resume paper - chosen for the fact that I had a lot of it :). That's is also why the "Join Us" on the front was in black ink. I would have liked to have done it in brown but I didn't have a color printer. So black it was. For the fonts, I used Century Gothic, which is the same font as Simple Alphabet - that took some time to figure out but I'm so glad I did! The cursive font is Little Days. Nichole featured it in a project long ago and I think it really matches baby items. I also rounded all the outside corners. 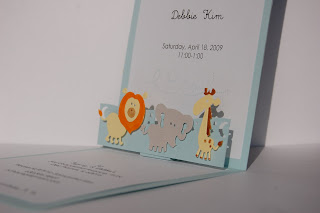 For some reason, I really wanted to make a pop-up card. I must of seen it somewhere. I do have a card book that I bought when we went to Japan but I made it simple so that there would be no cutting. Basically you cut a small strip of paper and score it so that when folded, you have a box. You adhere one end to the top of the card and the other to the bottom. Then on the flat piece you can add what you want to "pop-up." I realize this explanation really doesn't explain anything... I'll try and put up a better one later :). To decorate the pop-up piece, I die cut animals using my Cuttlebug and colored in parts of them with marker. It was easier than paper piecing, especially since the hubby ended up helping out with the coloring and adhering. I used a border punch to get the moon & stars edge, so cute!

Oh how cute!!! Love the outside and inside!