Well... I've decided to pick up this blogging thing again. I went to the CHA Super Show last weekend and after meeting fellow bloggers, PTI forum members and of course PTI superstars and Nichole (!) (see picture below), I felt the need to contribute to the blogging world again. :) It also helped being crafty, just to be crafty. I went with 2 of my co-workers/scrappy/crafty friends and we had a blast slowly meandering from booth to booth doing some make-&-takes and checking things out. 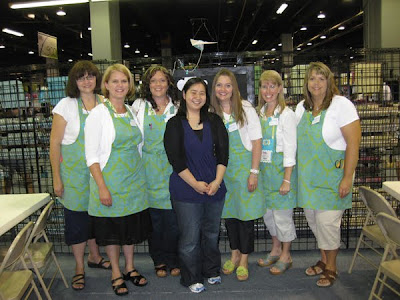 From L-R: Debbie Olson, Heather Nichols, Nichole Heady, me, Dawn McVey, Jennifer Ellefson, Michelle Wooderson
Why do I look so nervous and short? Cuz I am.
So you may be asking, "where the heck have you been?" And I would answer, "right here, reading and absorbing everything, just not posting!" Then naturally you would ask, "Why not?" And instead of a smarty-pants answer, I would launch into a long summary of where I've been. But since you are not physically in front of me to hear that long summary, I will give you the bulleted list version. And hopefully I'll start elaborating as I get back to blogging.

Now, of course, you're probably thinking, "oh no! She's gonna post an abnoxious amout of gratuitously cute baby pictures." And because you thought it - I will! Just kidding... I'll just put up a small smattering here & there for fun. There's plenty of time for that, plus- that's what Facebook is for. 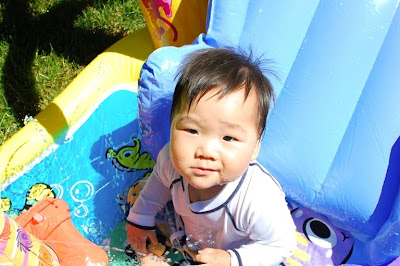 A somewhat recent picture from this summer. He looks sheepish to convey my feelings for the lack of posting
On the crafty side of things, I did craft up until the baby was born, we will call that period: A.T. (ante tyler) - my Latin is very limited and mostly only to medical terminology. But just did not have the energy to post. Then with the disconcerting news we received in January, I started blogging about that experience separately. Ask if ya wanna read about it. I'm sure pieces of it will start to flow into this blog. Then all you mommies know, it is hard to carve out time to sit and do anything. I've been able to do some stuff here & there but only in sort of an "as needed" basis - in a "oh wedding today?" whip something up kind of way.

So I am calling this time in my crafty life: P.T. (post tyler) and hopefully it will provide some reading fun for you all!

So glad to have you back and so glad that everything was ok with Tyler! He's adorable! So glad we had a chance to meet at CHA!